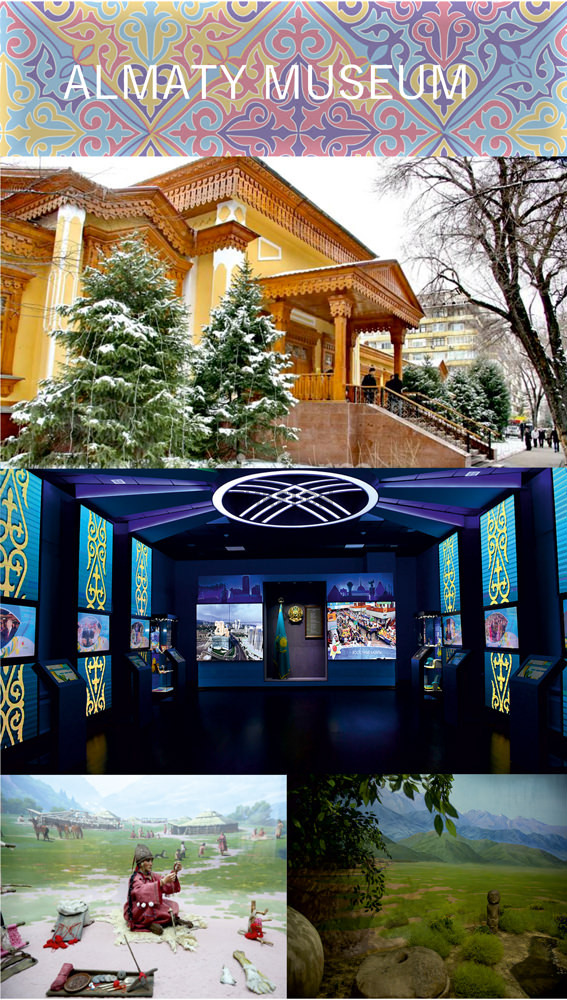 Museum of Almaty was opened by the order of the Leader of Nation N. A. Nazarbayev, within the framework of 25 years of the Independence of Kazakhstan and 1000years of Almaty city. The fund of the museum has more than 35 thousand exhibits. Among them – masterpieces of fine art, unique collections of Kazakh ethnography, also of other nations, who have been living in Almaty, collections of householding items of different epochs and culture, numismatics, photo and documents.

Museum is open in the building of architectural monument of XIX century, which was designed by the architect Paul Gourdet.

The exposition of the museum consist of 11 halls, which reflect the history of Almaty from past to present.

Exposition opens the halls such as “Ancient and medieval history of Almaty”, the main theme of which is the urbanization process of Almaty from small settlements, appeared three thousand years ago, to medieval city on the Great Silk Way, with the center of administration, craft and trade, culture and ideology.

The halls “The beginning of Kazakh state” and “Ethnography of Zhetysu” open the history of region in the period of creation and formation of Kazakh Khanate, military art of Kazakhs, Kazakh ethnography. Unique samples of jewellery art, householding items, which tell about the craft and in the section of materialistic culture of Kazakh nation.

Exposition, dedicated to the development of the city at the turn of XIX-XX centuries, is presented in the hall of “Vernyi period history of Almaty”. Rare examples of mahogany masters furniture art and amazing items of householding of XIX century, pass the inimitable atmosphere of the epoch. Central part of exposition is devoted to A. Zenkov.

Hall of “Almaty in XX century” tells about the most important milestones of Almaty history – capital of Kazakh SSR. Installations and projection screens “Turksib”, “Political repressions”, “Almaty in the years of Great Patriotic War” tell about harsh, tragic pages of our country’s history. Post war period is represented with samples of food and consumer goods industry, personal kits and householding items, which allow us to feel the scent of hat epoch and plunge into 50-60s of last centenary.

Development of professional art, connected with the names of talented singers and composers cast, such as K. Baiseitova, R. Baglanova, B. Tulegenova, unique collection of television and radio apparatus, musical instruments are represented in the hall of “Culture and art development”.

“Zheltoksan” hall is dedicated to December events of 1986. Unique exhibits, archive documents, photo and video materials of that time are displayed in the exposition.

“President and Almaty” hall provides us with unique, opportunity to get acquainted with the history of a golden cradle of Independence – the city of Almaty. A fascinating presentation of the historical material creates a bright impression and broadens knowledge about modern Kazakh megacity, which was and still is a financial, economical, cultural, touristic centre of the country.

“Peace and harmony model” hall is devoted to the Assembly of People of Kazakhstan.

Besides, visitors can be acquainted with the history of alpinism in “Alpinism” hall. The exposition of the museum is rich of wide variety of multimedia technologies, which display an extensive information and illustrative material due to all sections of the history. Museum of Almaty is a mirror of the history, modernity and future of our city.