Distance from the station: 150 meters.

Parking: ground parking for 60 cars. It is free of charge. Entrance from Bigeldinov Street, below Zheltoksan Street.

Gorky Theatre is one of the main attractions of Nur-Sultan, whose building is the most important historical value, which is not so much in the rapidly developing city. Capital lovers of theatrical art tell the story of how the first foundation of the theatre was laid in Akmolinsk in 1899, according to the statement of fans of dramatic art. The City Administration allocated 100 rubles, the famous merchant-mecenate Kubrin allocated even more, and as a result, the long dream of theaters finally received the official status and his home. 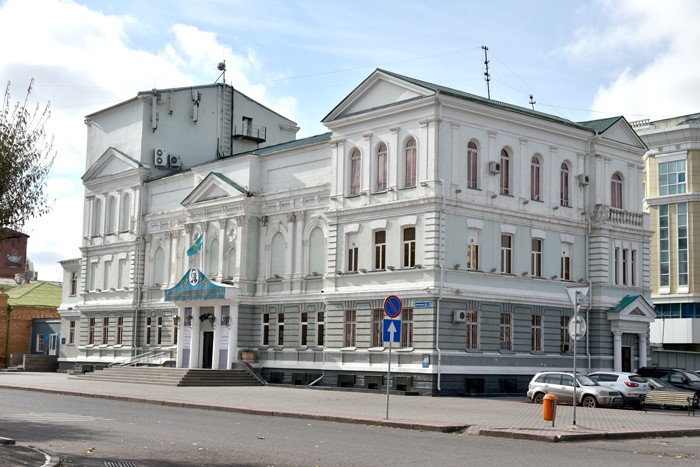 Not a single decade of the theatre's existence could be called an easy one: In the 20s and 30s, the staff of the theater was assembled, and he himself acquired a posthumously necessary appearance; in the 40-50s, despite the Great Patriotic War, the theater comes out in the front row and puts not only the usual Soviet drama, but also draws attention to Kazakh literature - so the repertoire appears "Kozy Korpesh and Bayan-Sulu" and "Aldar-Kose", and since 1959 the theater begins to bear the name of Maxim Gorky; in the 60s continues the line that began in the last decade - the play "Saken Seyfullin" by S. S. Mukanov, first staged in Russian, was awarded a 1st-degree diploma at a republican review; the 70s and 80s were also successful, and the 1990s were one of the most difficult and successful years for Gorkyites. First of all, it is undoubtedly connected with the gaining of independence of Kazakhstan - hard but light time, full of ups and discoveries.

In 2007, the theater was headed by Honored Worker of the RK Kasenov Erkin Tleugazinovich, and from that moment the theater began its rapid journey up, annually gaining recognition not only in Russia and CIS countries but also in Asia and Europe. So, in the same year the theatre performed at the International Theatre Festival, which took place in the framework of the World Congress, dedicated to the year of the Russian language in Granada and became its laureate. Since 2007 the theatre has been constantly receiving invitations from the International Festival of Russian Theatres of the CIS and Baltic countries "Meetings in Russia" (St. Petersburg), where it performed in 2007, 2010, 2012, 2015.

Since 2007, the Gorky Theatre in Moscow has been a member of the Association of Russian Theatres, which was established on the initiative of the Centre for Support of Russian Theatres Abroad under the Union of Theatre Workers of the Russian Federation in Moscow. In the same year, for the first time, the Moscow government award "Compatriot" for the promotion of Russian culture and art in Kazakhstan was awarded to the People's Artist of Kyrgyzstan S. M. Gorky. Matveev, Honoured Artist of Kazakhstan N. Kosenko, L. Abasova.

In 2008, the Gorky Theatre was not only the only Kazakh theatre that took part in the III International Theatre Season dedicated to the work of U. S. Shakespeare in Beijing, but it also turned out to be the only representative of the CIS - groups from China, Israel, Lithuania, and many other European countries presented their performances.

Since then, the theatre's staff has annually visited festivals, from which they bring various diplomas and awards.

In 2012, thanks largely to the energy and experience of E. Kasenov, who made a lot of efforts to develop the theatre and popularise it outside the CIS, the theatre was awarded the status of "Academic".

The repertoire of the Gorky Theatre 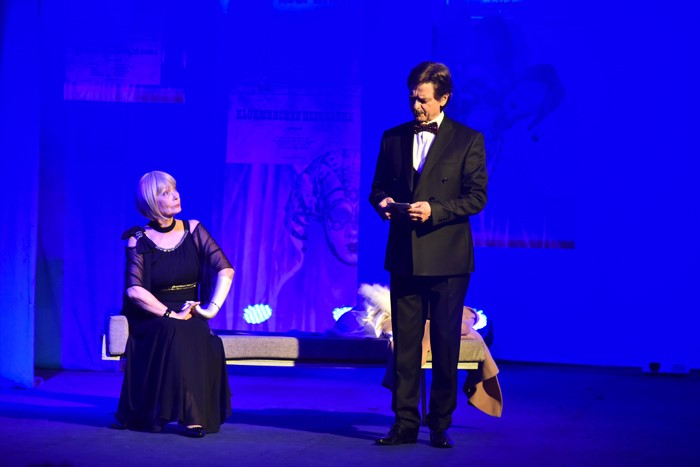 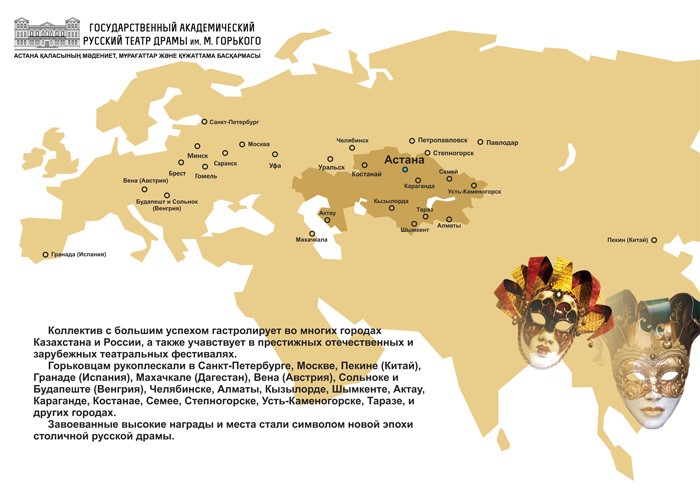